If you’re looking for a lower calorie version of your favorite eggplant parmesan, this healthier baked eggplant parmesan is it! This recipe is made with minimal ingredients, reduced fat dairy products and portion controlled so you get the same flavor and protein content as traditional recipes without as many calories or fat. 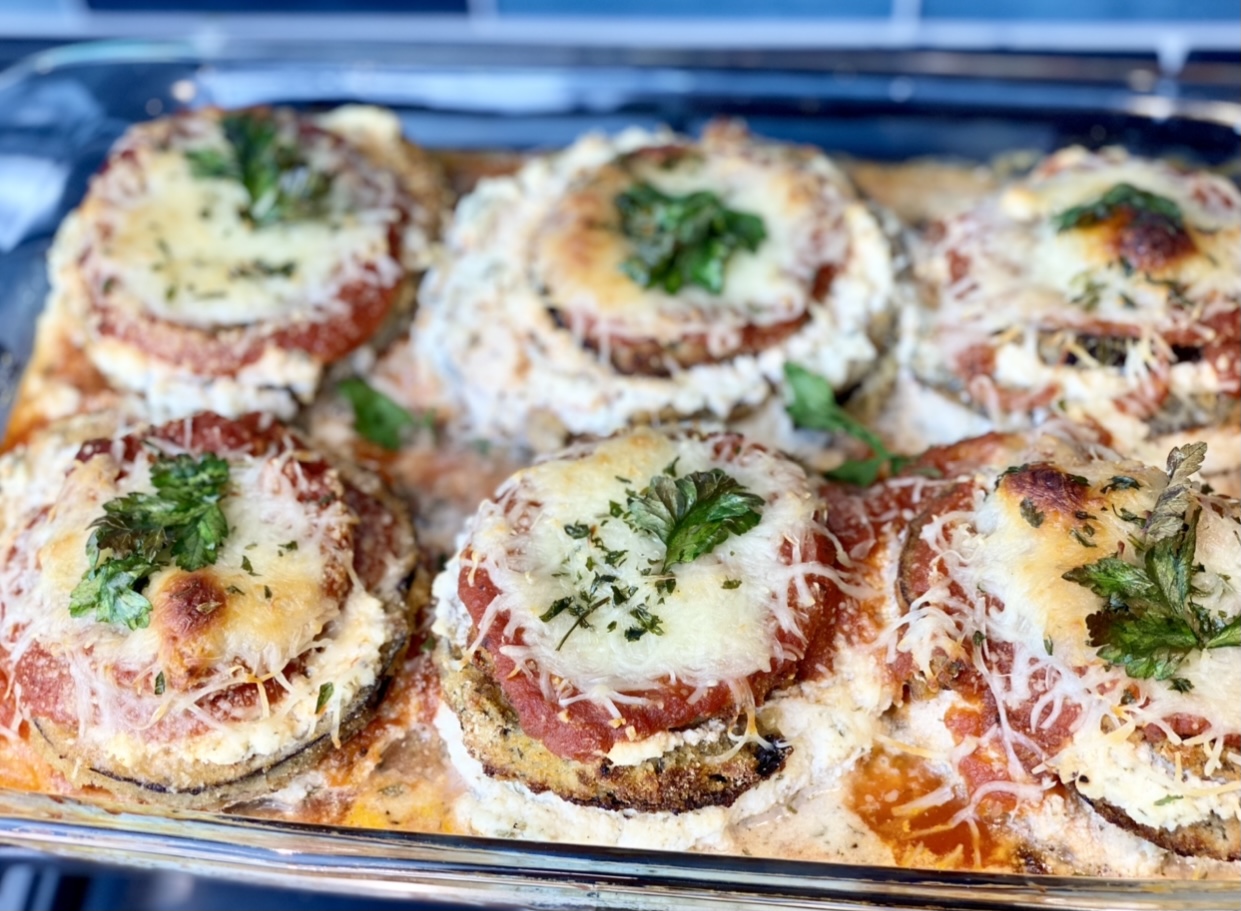 As a sports dietitian, I work with athletes, busy families and other clients looking to live a healthier lifestyle. My clients need healthy recipes that are delicious, while being easy to prepare. When I first started my blog, I focused on creating balanced smoothies, entrée salads, quick fixes and other recipes that provide a wide range of nutrients all in one dish. As my blog audience has grown,  however, I’m getting more and more requests for healthier versions of more traditional dishes. A healthier version of traditional eggplant parmesan is one of the requests.

This recipe is a bit more labor intensive than most that I share, but still relatively simple to prepare. If you’re looking for a lower calorie, lower fat version of traditional eggplant parmesan, try this baked version instead.

How To Make Eggplant Parmesan

Eggplant parmesan is made in multiple steps, which makes it a bit more labor intensive than other recipes. The eggplant has to be prepared and baked first, before it can be layered in the dish.  Below is an easy, step-by-step guide on how to make it.

STEP #1 – Prepare The Eggplant And Coating

The first step in making this baked eggplant parmesan to make the breaded eggplant slices. Make sure to preheat the oven to 400 degrees first so that it’s hot when you have the slices breaded. You can also prepare your baking sheets. I like to use Parchment paper that’s been sprayed with cooking oil but you can also use foil. Once prepared, set them aside.

Rinse the eggplant then cut off and discard the ends. Use a sharp knife to cut both eggplants into ~ ½ inch slices. Eggplant has a high water content, so you’ll want to try to remove as much water as possible before you bread the slices. To do that, lay them on a paper towel as you cut them, then pat them well to absorb any excess moisture. Some recipes suggest adding kosher salt to the slices to help pull out more fluid, but that is not necessary for this recipe.

Crack all three eggs in a medium bowl then add only ½ tablespoon of the milk. Whisk that together and set aside. Next, pour the bread crumbs onto a plate or shallow bowl. I use bread crumbs that are already seasoned so that I don’t need to add anything to them. If you only have plain bread crumbs, I suggest adding some dried parsley, oregano or other dried seasoning to them to add some flavor. Now you are ready to bread your eggplant slices.

STEP #2 – Bread And Bake The Eggplant

Use a dry paper towel to pat the eggplant slices, removing as much moisture as possible. Dip an eggplant slice in the egg mixture then coat in breadcrumbs. Shake off any excess breadcrumbs then lay it on the baking sheet. Repeat that for each slice of eggplant. Due to the shape of the eggplant, you will have some a combination of large, medium and small eggplant slices. Don’t worry about that. Once you start layering them, you can cut and combine the smaller pieces so that your layers are even. 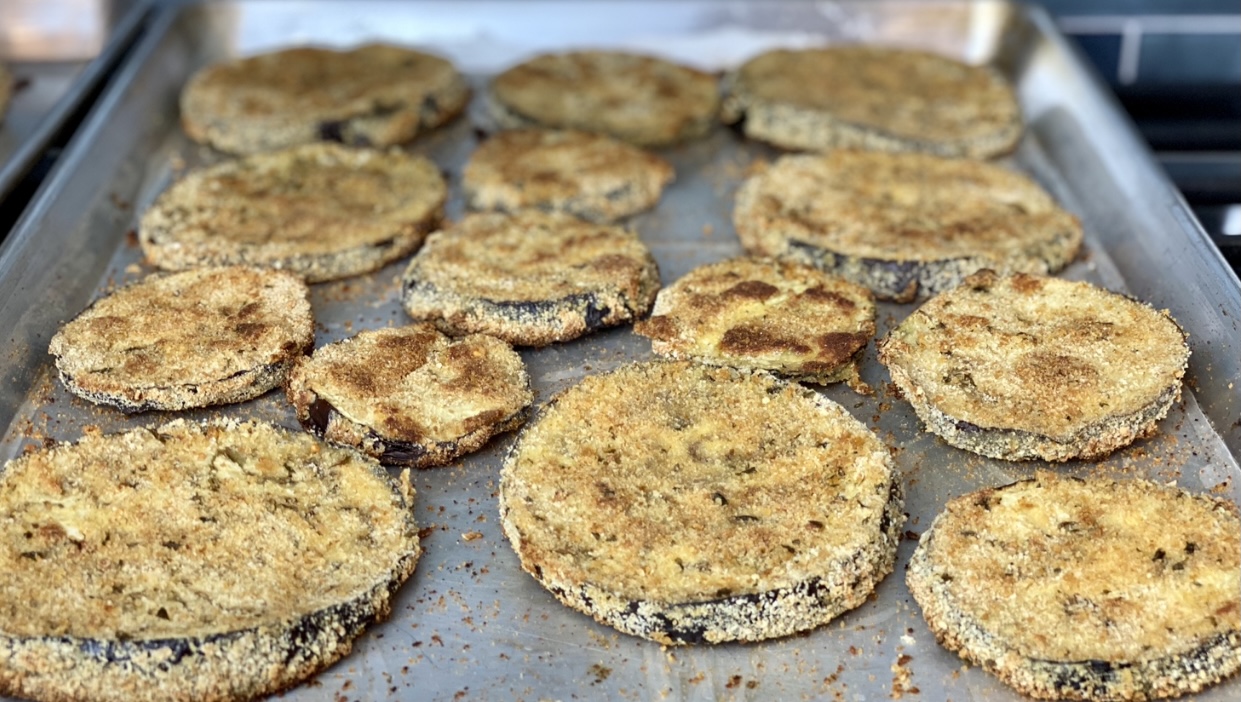 Once all of the eggplant slices are breaded, transfer both sheet pans to the oven and bake for ~20 minutes, or until golden brown on bottom. If you like a really crispy coating, you can flip the slices after ~15 minutes so that both sides are brown and similar in texture. 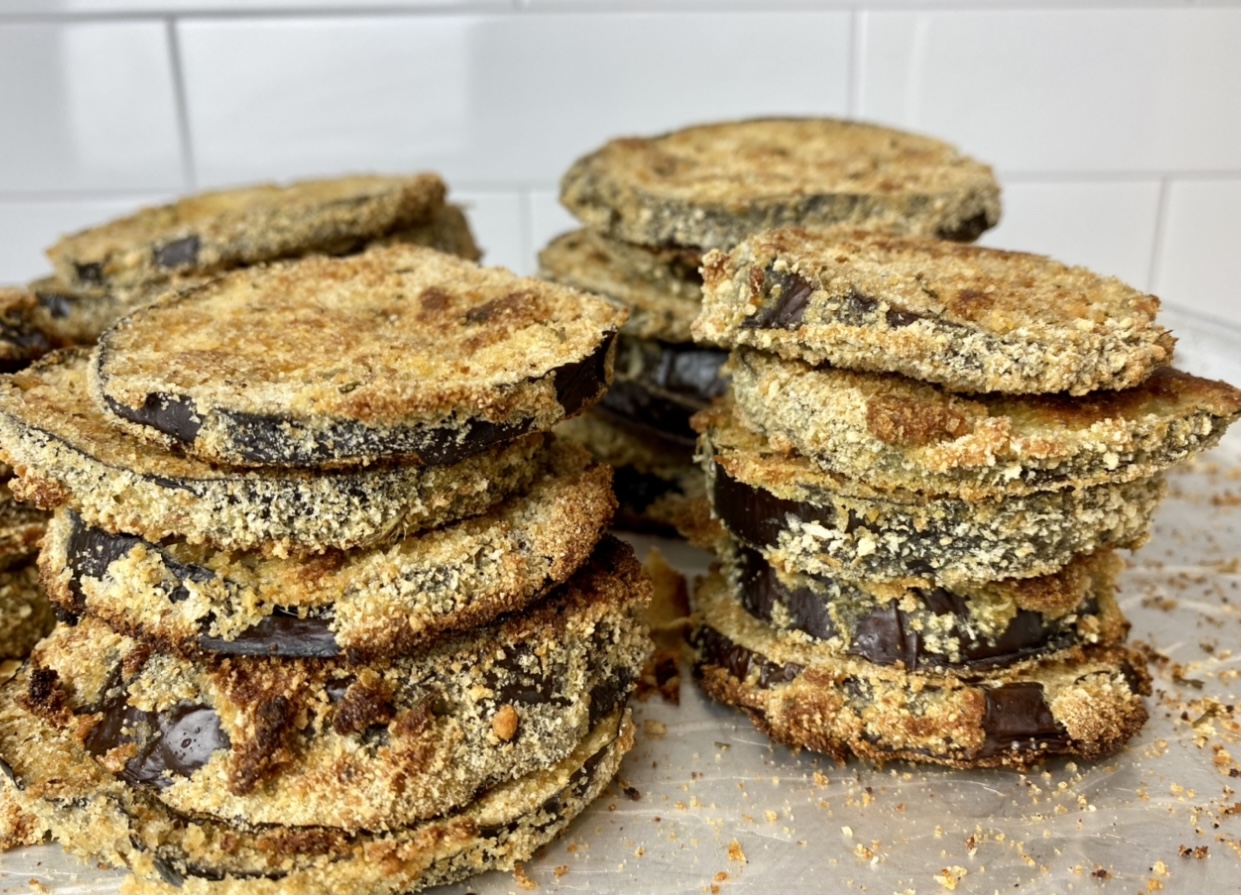 While the breaded eggplant slices are cooking, you can prepare the cheese mixture. In a large bowl, combine the ricotta cheese, remaining milk and dried parsley. Stir well then set aside.

Prepare the casserole dish you will use to make the baked eggplant parmesan by covering the bottom of the dish with sauce. Set that aside until the breaded eggplant slices are finished cooking.

Once finished, remove the breaded eggplant slices from the oven. Choose the six largest slices for the bottom layer, placing them over the sauce. You should have a small amount of space between slices. That is helpful when you cut the eggplant parmesan, because you can easily identify the 6 individual servings. 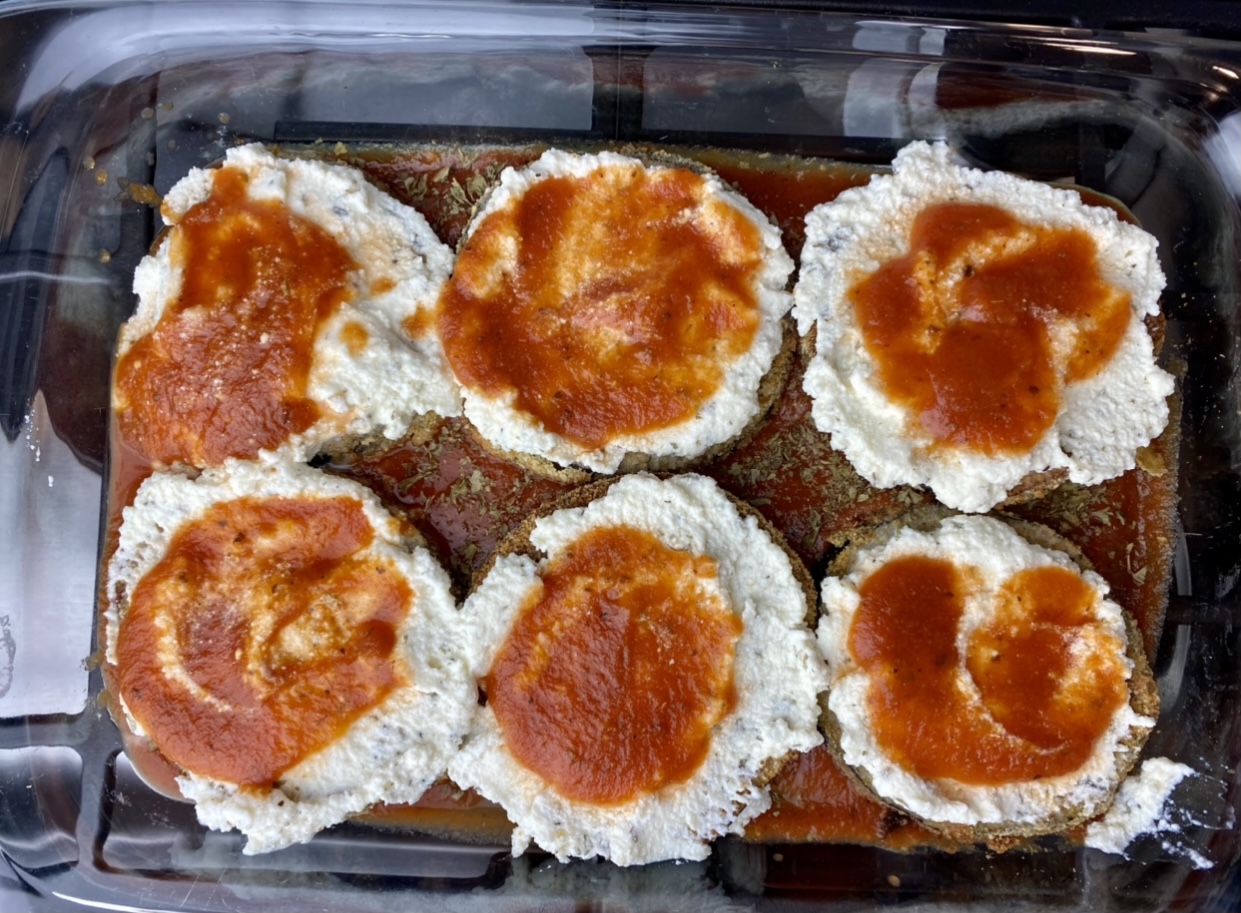 Put a large scoop of the ricotta cheese filling on each eggplant slice, pressing down to cover the eggplant, then pour ~2 tablespoons of sauce over top. You can now start the second layer by placing a second piece of baked eggplant over the sauce. Try to use a slice that is similar in size or slightly smaller than the bottom slice. 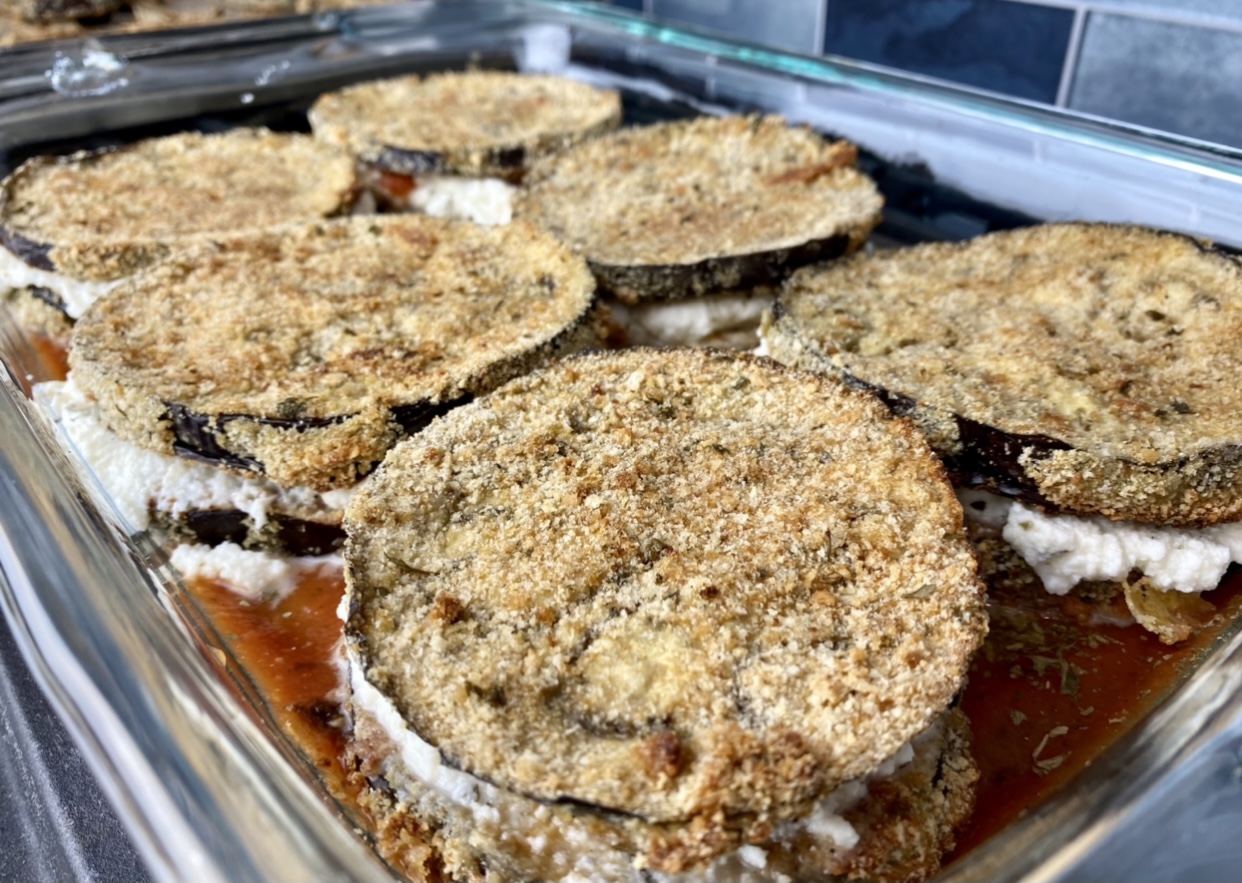 Add a large scoop of ricotta mixture and sauce over the second layer. When you get to the third layer, you will probably not have any large slices left. Add one of the smaller slices to the top of each layer, then slice the remaining slices in half. Lay a second small piece, or one of the ½ slices next to it, trying to keep the piles even. It’s ok if the top slice doesn’t line up exactly. The goal is to have equal amounts of eggplant in each serving. 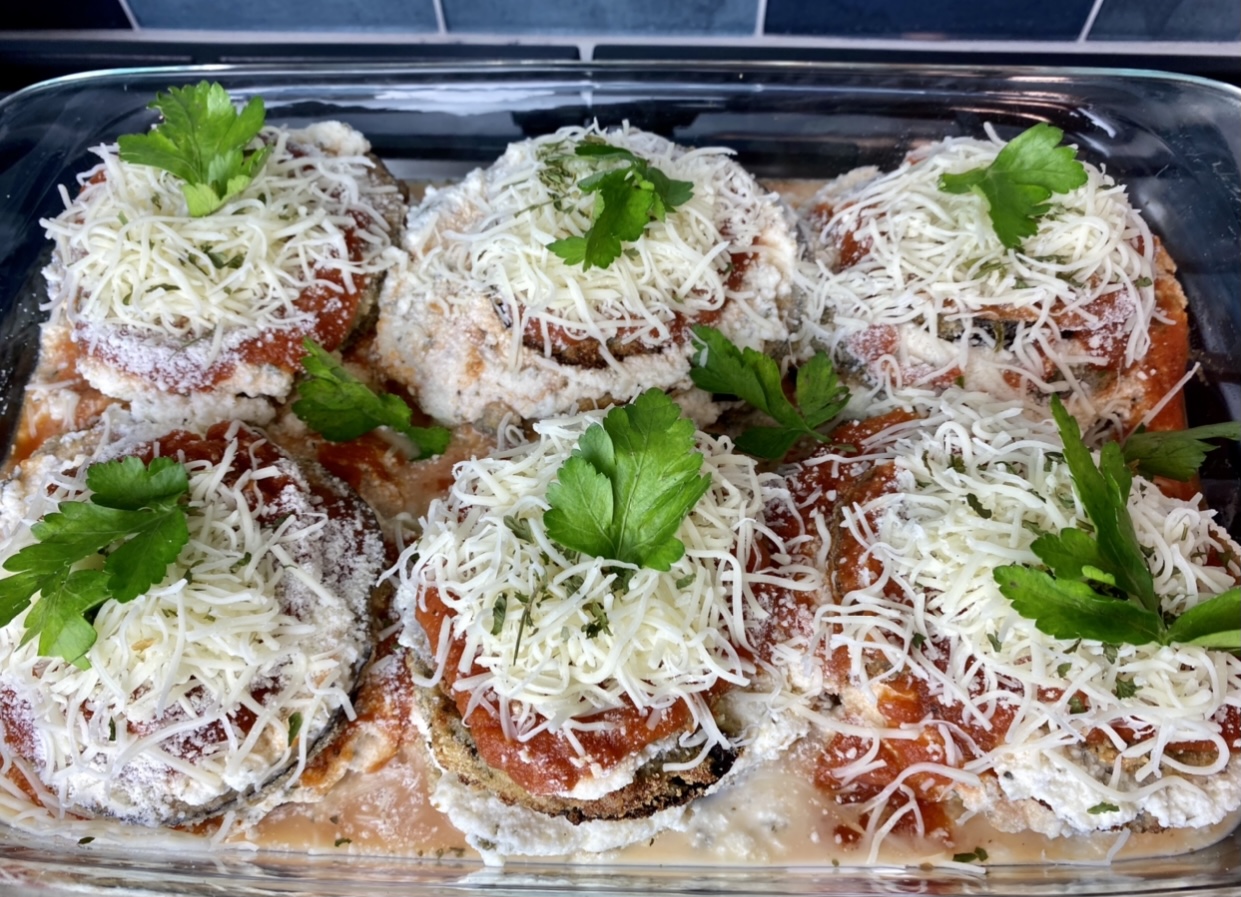 Pour any remaining sauce over the top of the eggplant then cover all 6 piles with mozzarella cheese.  Sprinkle some Parmesan cheese over the mozzarella, then sprinkle with fresh parsley.

Cover the dish with a piece of foil and bake in the oven 15 minutes. The eggplant parmesan is cooked at this point, but the cheese on top may not be completely melted. Remove the foil and let it cook uncovered for an additional 5-7 minutes or until the cheese is melted and golden brown. 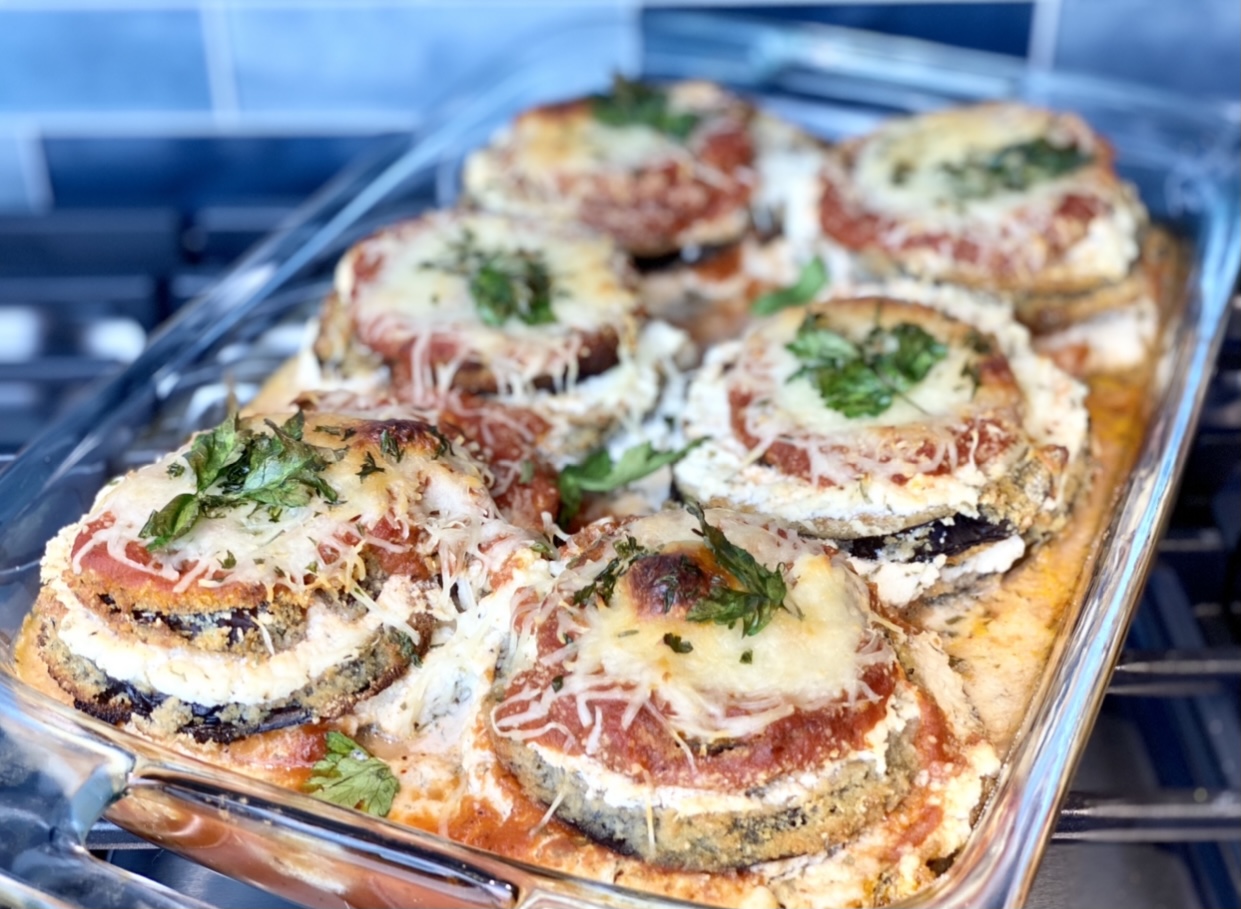 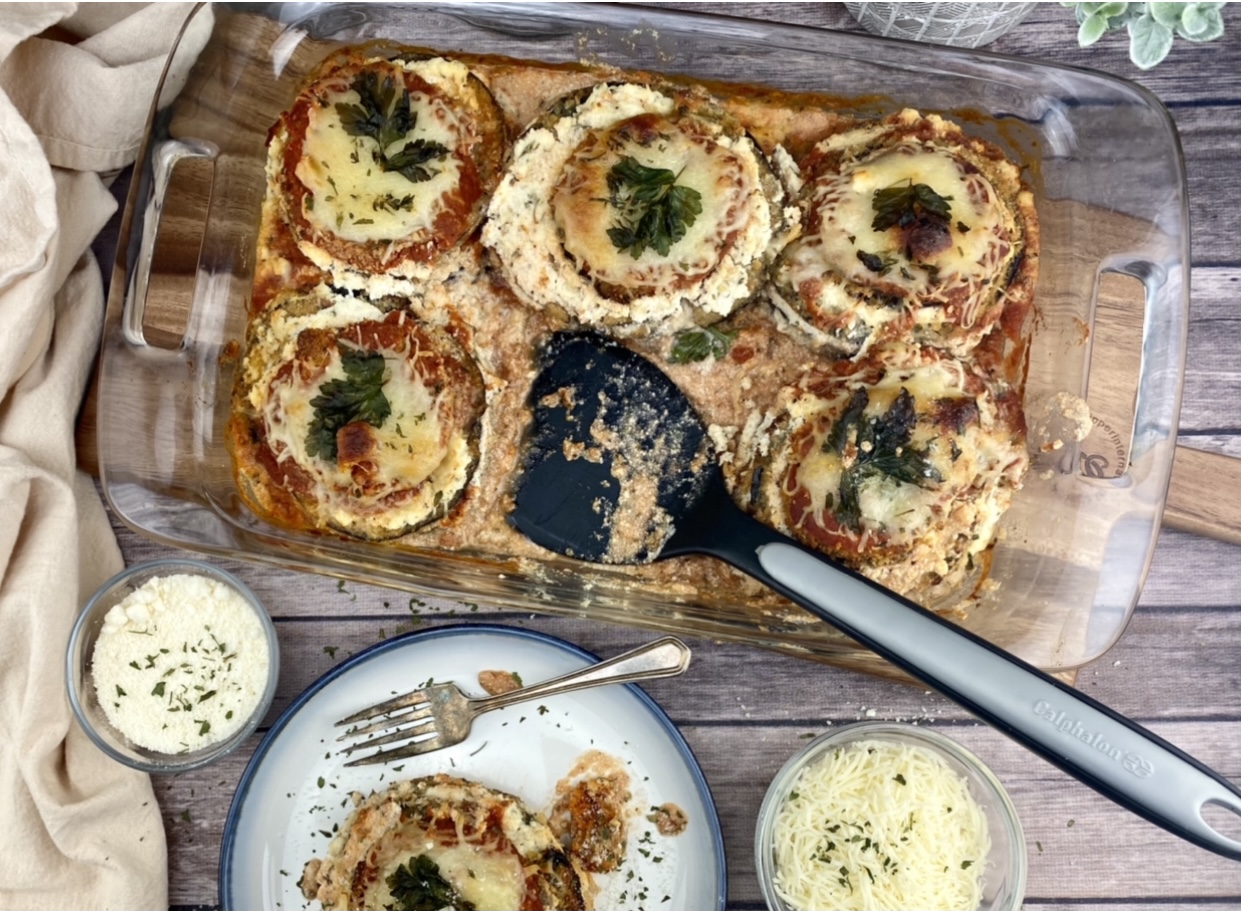 If you like this healthier baked eggplant parmesan recipe, you might also like my crustless tomato and zucchini pie or my healthier chicken pot pie recipe.

If you’re looking for an easy, healthier version of your favorite eggplant parmesan, this is it! This recipe is made with minimal ingredients, part-skim and reduced fat dairy products and portion controlled so you get the same flavor and protein content as traditional recipes without as many calories or fat.

DID YOU MAKE THIS RECIPE?  Tag @heathermangieri  on Instagram and hashtag it #HeatherMangieriNutrition to all recipes. Or, Pin it on Pinterest for later!