The stars are aligning for a big year for Merica Labz, the world’s most patriotic supplement brand. With a beautiful restoration displayed in their updated Red, White, & Boom pre workout supplement to go along with the updated Patriot’s Whey, Merica Labz fans asked for more.

We got way more – first, in the form of more calories thanks to the incredible Super Sized weight gainer. But that wasn’t enough (it’s never enough*), because Merica Labz fans wanted more pumps! Asked and answered: 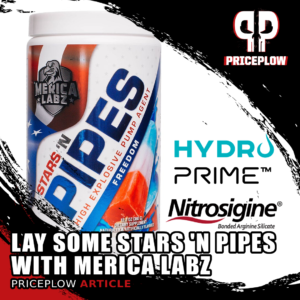 The popular stimulant-free pre-workout supplement has not only been given a fresh look with Merica’s new branding, its formula’s been tweaked. On top of a huge helping of L-citrulline, we now have two more trademarked ingredients in the form of HydroPrime glycerol from NNB Nutrition and Nitrosigine from Nutrition21.

Topped off with one more nitric oxide amplifier, Stars ‘N Pipes is sure to be exactly what it claims on its new label: high-explosive pump agent. May want to watch out when bringing this bad boy through airport security!

The formula’s covered below, but first let’s show the new flavors (highlighted in yellow) and our video:

Note: Freedom is the one flavor that has the same name as the original version. If you want this new HydroPrime-powered formula, make sure you get the new branding with diagonal writing or check with your retailer.

The perfect partner for BOOM, each 17.5 gram scoop of Stars ‘n Pipes brings you pumps from:

The flavors highlighted in yellow are the new flavors in the 2022 re-launch, with Freedom being the only flavor name kept from the original: 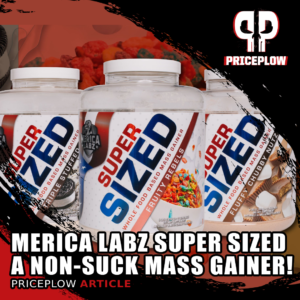 After an incredible Red, White, & BOOM release, the restoration of Merica Labz (also discussed in our updated Merica Energy article) is well underway. The honest truth is that BOOM really doesn’t need a ton of “help” – it’s a fantastic pre workout. But there are definitely times when you want more than just citrulline, and the added HydroPrime and Nitrosigine are epic pump-stackers.

In addition, there are times when you just don’t want the long-lasting stims in BOOM or other pre workouts. If you’re looking for a pump-heavy stim-free pre workout that doesn’t mess around with much else, Stars ‘N Pipes is where it’s at.

After your training, it’s time to work on keeping those pipes big and full. To pack in as many calories as you can, check out Merica Labz Super Sized, a weight gainer protein powder that will drive carbs and protein into the muscles you just blew out with your workout.

Now get ready to lay some Stars ‘N Pipes.

Note: Freedom is the one flavor that has the same name as the original version. If you want this new HydroPrime-powered formula, make sure you get the new branding with diagonal writing or check with your retailer.