These broiled oysters are served on the half-shell for a tasty low carb appetizer that’s buttery, sweet, and salty! 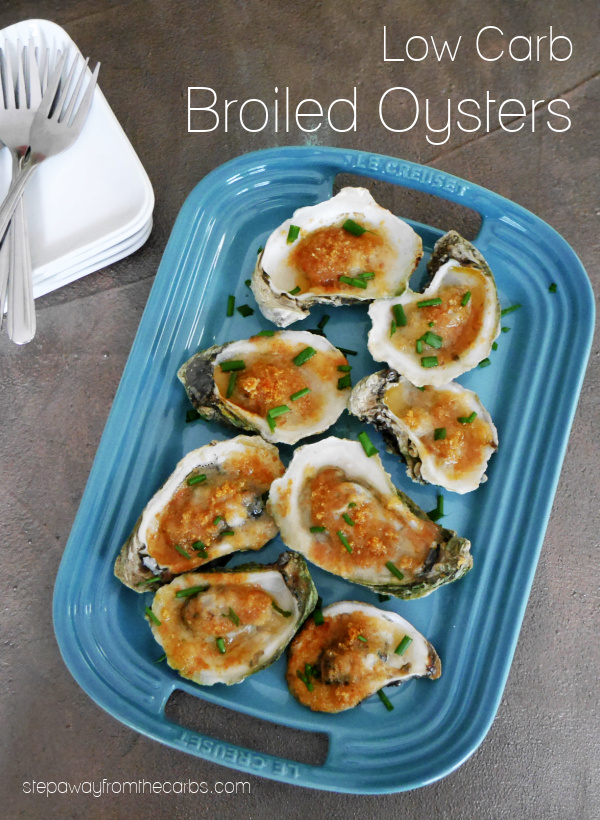 The following post contains affiliate links, which means that at no extra cost to you I can make a tiny bit of money to help support this blog. Thank you!

I recently found some reasonably priced frozen oysters on the half shell that I wanted to experiment with. They were Eastern oysters (also known as Atlantic oysters, American oysters, or East Coast oysters) and although you could totally thaw them and eat them raw, I wanted to lightly cook them. Something like Oysters Rockefeller (oysters on the half-shell that have been topped with a rich sauce of butter, herbs, and breadcrumbs, then baked or broiled) but with a tomato-based sauce.

This recipe is the result of my experiments and is a fantastic way to use frozen oysters!

As I mentioned in my guide to hidden carbs, oysters aren’t as low in carbohydrates as other seafood. But that doesn’t mean that you have to avoid them completely! Raw oysters contain approximately 4.7g carbs per 3 oz (85g) serving  – obviously without the shell! This is equal to about six medium oysters. With this recipe I’ve halved this serving size and suggested that 6 oz (about twelve oysters) serves four people as an appetizer. But if your carb count allows then of course you can split between two people instead!

Thoroughly thaw the oysters in the fridge, if previously frozen. Place them onto a large baking sheet. 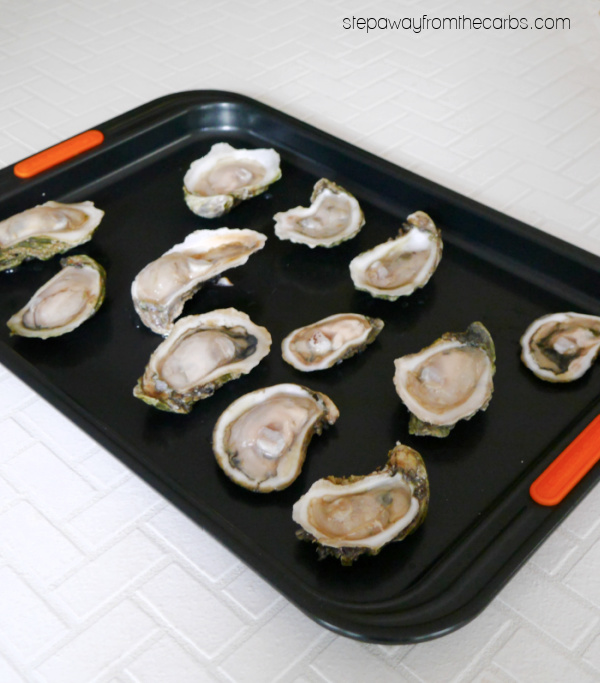 In a bowl, melt some butter in the microwave. Add some low carb ketchup (I used G Hughes but check out my full list of low carb ketchup ideas – both store-bought and homemade!), Worcestershire sauce, and a splash (or a few) of Tabasco or your favorite hot sauce. 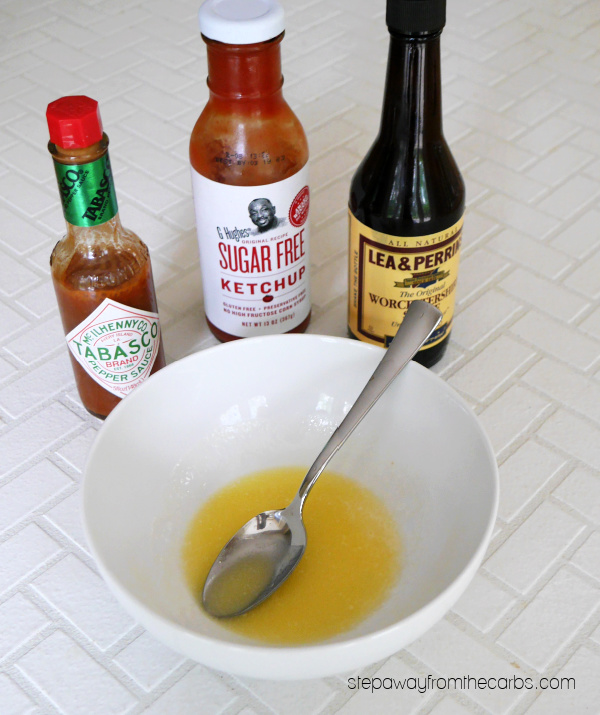 Mix well, then spoon about a tablespoon of the mixture into each oyster shell – the exact amount will depend on the size and shape of the oysters. Sprinkle about a teaspoon of pork panko over each one. 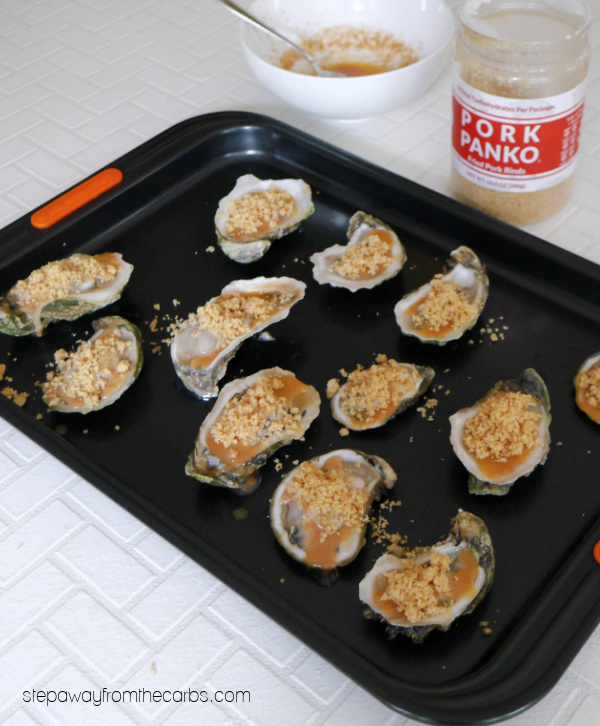 Place under a preheated broiler for 3-4 minutes or until the tops start to turn golden brown.

Carefully transfer the oysters to a serving platter (try not to spill any of the liquid!), garnish with chopped chives or parsley. Serve immediately. 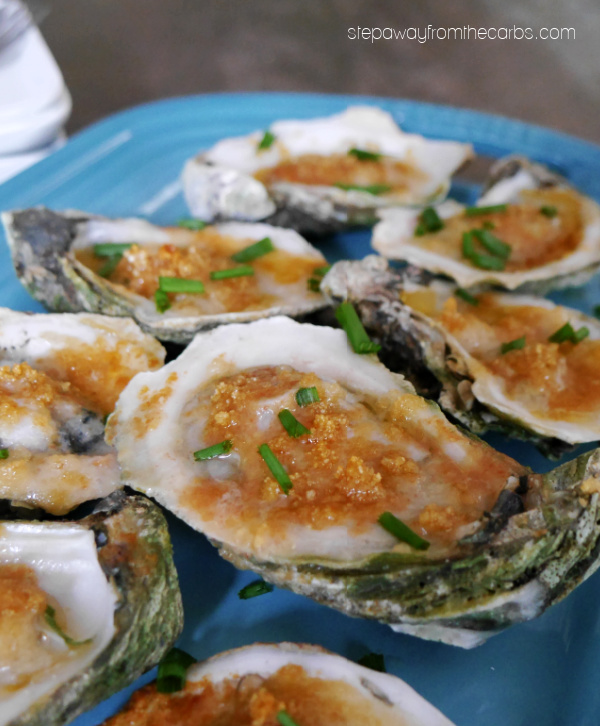 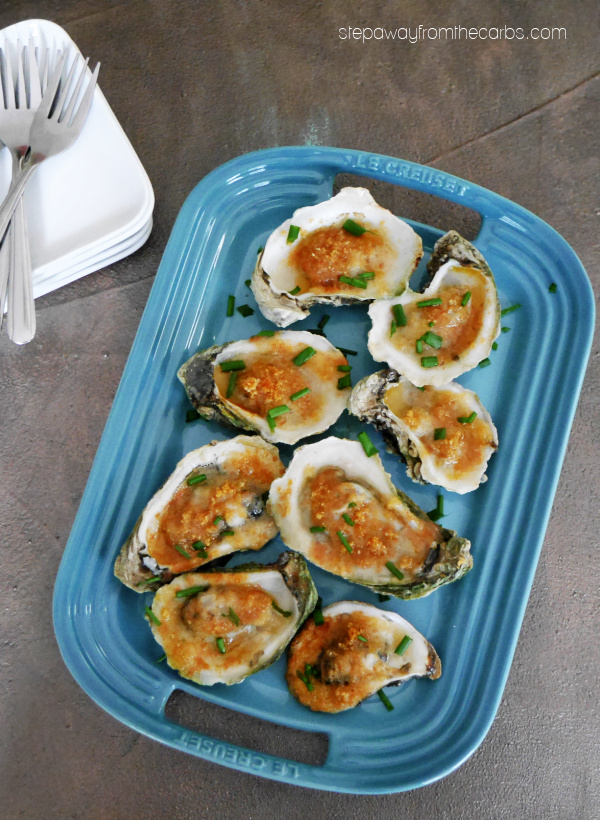 The taste is so good – a slight sweetness from the ketchup, saltiness from the brine, and a delicious crunch from the pork panko!

As an Amazon Associate and member of other affiliate programs, I earn from qualifying purchases.